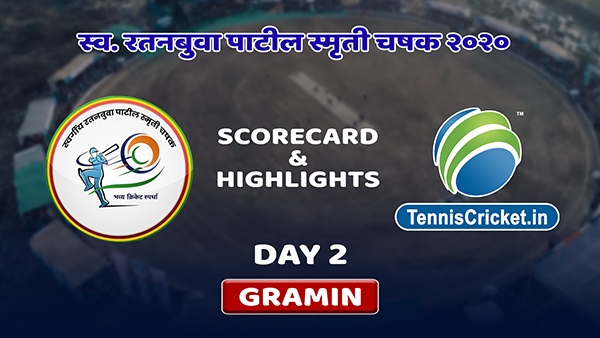 Dombivli: Second day of the Late Ratanbuva Patil Smruti Chashak 2020 saw record-breaking scores. Shilgoan team registered their name in a record book, making 107 in their round one game against Usarghar. The other game which saw the highest viewership on the second day was between defending champions Waklan and former champions Sonarpada. The second game of the day between Uttarshiv and Narivali ended in a tie in which Narivali won the battle based on wickets lose. A total of nine games were played throughout the day.

On the second day of the tournament, it was seen mixed-match results as the chasing team won three times out of nine games played. On the other hand five games ended in favor of team batting first. The major attraction of the day was a tie game between Uttarshiv and Narivali.

One of the most valuable players in Gramin tennis ball cricket Ketan Mhatre from Waklan won Rs. 30,000 when he sent three consecutive balls out of the park.

While in the second round, Rajesh Patil (Mhatardi) registered hat-trick against the Shilgoan