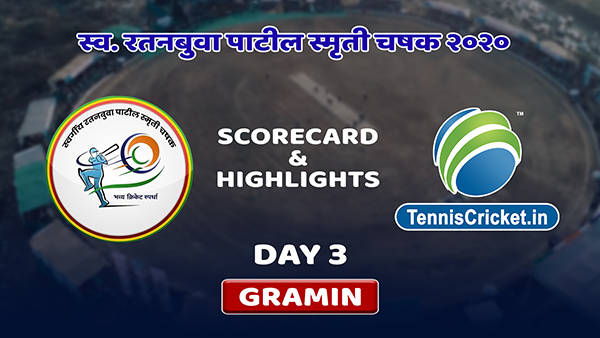 Dombivli: The excitement of the tournament going into high as it progresses into its third day. The third of the Gramin lot seen lots of performances throughout the day.

Baring two matches, remaining matches ended in a one-sided contest but thriller was at its best ball-by-ball. The fans supporting their players from the stands watch picture to watch.

Unlike the first two days, the third-day pitch started showing tougher to teams chasing the total. Five games were won by the team chasing the total. Also, there was mix and match weather which allows wind to flow at indifferent speed. This was effected on the ball condition in the latter half of the innings.

Well, there were hardly notable performances but Rahul Patil’s (Dahisar) 46 off 17 (2×4, 4×6) and Sai Shelar’s seven wickets in two games entertained all the spectators and viewers watching online.