Mr. Hrishkesh Viadya is a star player of this era of tennis cricket. He is also fndly called as ‘Dada’ . He started his career with a local team ‘Sayli-11, RCC’ and then he joined ‘Amrut11’ where his professional cricket journey started.

This calm and composed player is so famous, even outside Maharashtra that he gets several invitations to play in different states with the flight ticket expenses sponsored. He has played in Banglore, Rajkot, Indore as well as Gujarat.

There are very few players in professional cricket who are calm and show their sportsmen sprit at the same time on the field.

He plays his game with a lot of patience. He keeps standing on the crease till the end and makes his team win thereby showing his consistency.

Since last 15 years he has been playing in ‘Amrut 11’ . Till now he has been awared as best payer and best batsman many times. But in 2012 he got a Nano car as a prize for his ‘Man of match’ title.

Likes To play in tournament held at   Mumbai :  Suprimo 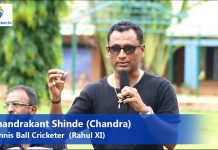 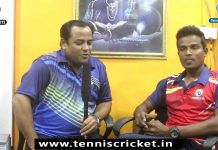