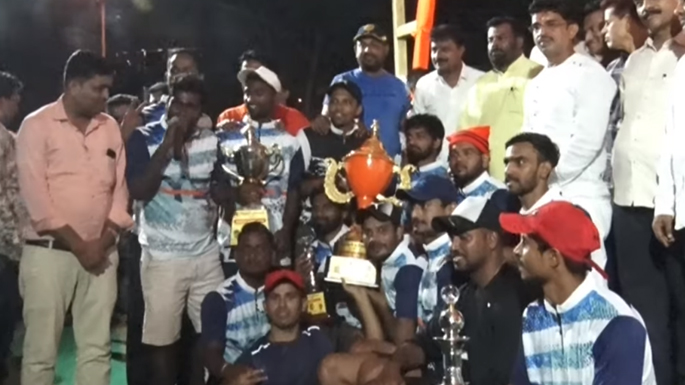 The beauty of rainy cricket which is being played by rubber ball witnessed by the fans of Navi Mumbai and across fraternity in continuous heavy rainfall. The players across the Maharashtra state were part of this tournament including some of the members from Team India’s successful ICC Criiio cup 2019 campaign earlier this month in London, England

In the one-sided final, Haresh and Mukesh fulfilled their duties as openers when they put 36 runs for the first wicket in just 12 balls before Mukesh (17 6b, 1×4, 2×6) was caught by Sanmesh off the Rupesh’s bowling. But his other partner Haresh took the charge and settled a decent score for Riyan XI. Haresh (47* 17b, 1×4, 5×6) magnified Riyan XI innings with his unbeaten know to 93 for just one in their five overs quota.

In reply, Sundar Pratishthan didn’t look ambitious to take hands on the trophy. Their openers managed only two runs in first over. Pintu Parcha and Bhavesh who are known for their big hits were controlled by Deepak who bowled that first over. From there, Riyan XI took the complete charge and restricted Sundar Pratishthan for just 38.

Player of the Tournament: Jitu (Bonkode)