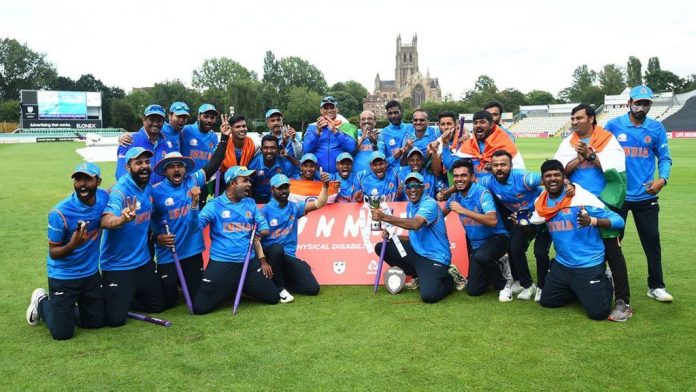 Worcester, England: India won the Physical Disability World Series 2019 in style after defeating hosts England in the final by 36 runs. Team India’s unbeaten campaign continues throughout the final. The series was organized by England and Wales Cricket Board (ECB).

After winning the toss, India captain Vikrant Keni opted to bat first. Openers Kunal Phanase and Wasim Khan couldn’t get their team off to a good start as Khan returned to the pavilion in the very first over for duck while Phanase scored 35 balls 36 before running out in the eighth over. Dombivlikar Ravindra Sante who scored a half century in the group stage against the same opponent once again shine. This time his quickfire half-century (53 off 34 balls) helped India to post commendable 180 in 20 overs.

India’s bowling department did a fantastic job after tremendous bowling performance. The collective efforts from all the bowlers bundled out England for 144. For hosts, opener Argus Brown was the top scorer with 32 balls 44 in their innings. Phanase and Sunny Goyat picked up a couple of wickets each to lead India to victory.